Physical (costs 5 XP for each increase)

Mental (costs 5 XP for each increase)

Red Earth comes from a silver mining village, where he was one of the best miners. He was thick, strong and powerfully built, making him perfect for all of that rock work. He didn’t seem to mind the darkness and didn’t feel claustrophobic as many do. He quickly became a foreman, one of the youngest in memory, because of his inherent ability to find silver veins. He said that he just “paid attention.” Red is a stoic man and does not seek a fight, but he does not shy away from one when he or his friends are in danger.

For unknown reasons, Red left his village after hearing of a magical library south along the mountains and coast that would teach one the wonders of the world. He decided that he was going to go there to learn more about this gift of being one with the earth.

Red has proven himself an able ally. His skills at detecting enemies from a distance cannot be matched. His powerful stature makes him an imposing fighter, be it with a hammer or with only his fists. His ability to cover himself in rock has proven a great defense against any who would do him harm. His practice of handling and manipulating boulders shows promise of being able to seriously injure anyone unfortunate enough to be in their path. 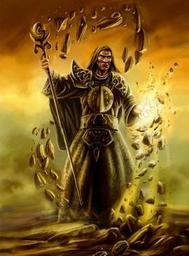 We've already been saving your edits, so if you upgrade now you will have instant access to your previous versions. Plus, you get a 15-day free trial, so there's nothing to lose.