A former soldier and now henchman, he specializes in ranged combat and a keen perception

History unknown. Since joining up with the party, Thin Boots has become something of an archer. Picking up the magical Bone Bow which was left after the barbarian massacre, Thin Boots has spent most of his time fascinated with the object and trying to improve his aim with it. His deadly aim was vital in saving the day during the dogmen massacre where he put arrows into the faces of both the battle mage and the barbarian captain.

Following the party into the dark city at the center of the island, Thin Boots has felt less at ease than anywhere he has been before. He is convinced the city is haunted by something, and has felt increasingly helpless as his magical bow’s arrows have shown to do little damage to the creatures encountered thus far in the city. 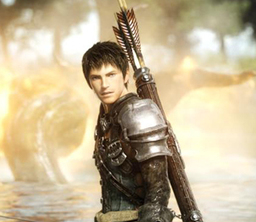 We've already been saving your edits, so if you upgrade now you will have instant access to your previous versions. Plus, you have our no risk refund guarantee , so there's nothing to lose.